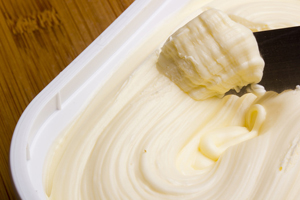 Some of you may already be enlightened as to the facts about Canola oil, but after my various complaints to Whole Foods regarding their liberal use of this highly refined, partially hydrogenated, poor excuse for a fat in their food bar have gone by the wayside, I feel I need to put the information here for all to see. Canola oil is the primary reason I advise all of my clients to curb their eating out. This is a biggie. Almost every restaurant you can possibly think of uses this oil to cook with.

Let’s be clear, healthy saturated fat is essential to healthy eating but Canola doesn’t come anywhere close to falling into this category. Referred to as the healthiest cooking oil available on the market by its makers, canola oil is low in saturated fat, high in monounsaturated fatty acid (MUFA), and polyunsaturated fat (PUFA) like omega-3 fatty acids.2 The oil is produced from pressed canola seed, which are harvested from pods obtained from the canola plant. This oil was the brainchild of Canadian agricultural executives in order to take advantage of turning a profit from an overabundance of the rapeseed plant. The oil straight from the seed was initially considered harmful and very bitter so a hybridized version of the plant was bred to make it more palatable.  Even with this hybridization, it was necessary to highly refine this oil before it could be made available commercially. And by the way, since 1995, the biotech behemoth Monsanto has been genetically engineering the seed to be, yep, you guessed it, Round Up Ready! 90% of the world’s Canola crop is genetically modified. It’s also subjected to extremely high temperatures during processing and is a polyunsaturated fat which means it easily oxidizes and becomes rancid. Studies have shown that anywhere from 0.56% to 4.2% of the fatty acids in Canola oil were toxic trans fats.

The Canadian government paid the FDA millions of dollars to have Canola oil placed on the GRAS (“Generally Recognized as Safe) list and a new industry was spawned. Lab studies with Rats were disastrous with the rats developing fatty degeneration of the heart, kidney, adrenals and thyroid gland. No significant studies on humans were ever made prior to marketing to consumers in the U.S.

Furthermore, the Weston A. Price website provides the following information:  Like all modern vegetable oils, canola oil goes through the process of caustic refining, bleaching and degumming–all of which involve high temperatures or chemicals of questionable safety. And because canola oil is high in omega-3 fatty acids, which easily become rancid and foul-smelling when subjected to oxygen and high temperatures, it must be deodorized. The standard deodorization process removes a large portion of the omega-3 fatty acids by turning them into trans fatty acids.

You can find arguments on both sides of the data that either support or advise against its use but here’s the bottom line – why consume highly refined oils of any kind? Nature has provided us with healthy, nutrient dense, life sustaining fats such as pastured butter, coconut oil, avocado oil, olive oil and fats from healthy pastured animals to name a few. It really comes down to economics. Canola oil is cheap. You get what you pay for in regards to your health dividends.  As I explain to all of my clients, for the most part, we are all born Ferraris. Why put diesel in the tank to save a few cents?

If you need further convincing regarding the controversy surrounding this oil, take a look at the video to see how it’s made. Ironically, this short film was actually made to promote the benefits of the oil. As is almost always the case with fat phobia, the film promotes the health benefits of it’s low saturated fat content. Yikes! A picture is worth a thousand words.

Feedback, comments? Hit me up!