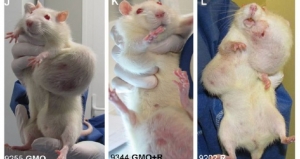 The fact of the matter is that you can’t afford not to. Despite what we’ve been told, the pesticides sprayed on factory farmed conventional produce don’t simply rinse off under tap water or even with the use of more effective cleaners such as a light vinegar solution. Pesticides such as Glyphosate, the active ingredient in Monsanto’s herbicide Roundup, which is arressively sprayed on genetically engineered (GE) Roundup Ready crops, is absorbed into the plant. According to Dr. Stephanie Seneff, a research scientist at the Massachusetts Institute of Technology (MIT), the two key problems caused by glyphosate in the diet are nutritional deficiencies and systemic toxicity. According to Dr. Seneff, the deadly pesticide is possibly “the most important factor in the development of multiple chronic diseases and conditions that have become prevalent in Westernized societies.” These conditions include but are not limited to:

These findings should be relevant to anyone consuming genetically modified food or produce liberally doused with this deadly herbicide. Purchasing healthy organic produce doesn’t have to break the bank. Local farmers’ markets offer up affordable alternatives to the consumer as well as your local C.S.A.(Community Supported Agriculture) I split a CSA with a neighbor of mine that cost me $250 for over 6 months of fresh, locally grown organic produce and quite honestly, some of it still ends up going bad because we can’t eat it fast enough. This is a viable solution if you add up what you spend on produce at the grocery store over the same period of time. This type of healthy choice also supports and encourages our local organic farmers which in turn creates healthy competition and drives prices even lower. If not for our own well being, let’s remember the long term impact the toxic alternatives will have on our children. Research shows clear correlations between increased glyphosate use over recent years (the result of genetically engineered crops causing weed resistance, necessitating ever-larger amounts to be used) and skyrocketing autism rates. The bottom line, if you’re spending $4 a cup on designer coffee, $100 a month on cable, eating out every week and have 20 pairs of shoes lined up in your closet, you can afford healthy organic food. If not for ourselves, let’s give our kids a fair shot at living healthy, productive and disease free lives.